I Socialize and Develop

I just got back from a very eventful DIS’16 where I was serving as a student volunteer and was also speaking at the conference. I got to meet other amazing student volunteers and attendees who came to Brisbane from all around the world and met at DIS. The best part were our volunteer t-shirts which read GENIUS on the back; we all did feel like geniuses, especially when people needed help and they yelled: “Excuse me, genius!”

Some photos from the conference with my fellow geniuses (Student Volunteers)

To me, DIS had a different flavor than the conferences I usually attended (CSCW & CHI): it was more compact, which allowed for many good conversations to occur with researchers and other students. (Also, it was easy to remember people’s names because you get to see them more than once a day.) In addition, the conference was very focused on tangible design, more so than theory or social science, which made for a really fun and very interactive experiance.

Being hosted by the awesome crew of QUT’s Urban Informatics Research Lab, it also had many interesting displays of user-centered smart cities and urban planning projects. Marcus Foth, the conference chair this year, did a brilliant job in organizing the conference. The way the conference was planned offered us many opprotonities to leave the conference venue and experience and interact with the city of Brisbane.

During the pre conference events, I participated in 2 workshops: 1) Internet of Things: Designing with Human Values and 2) The Making of Cross-Device Experiences: A Hands-on Workshop. Both workshops were good and hands-on. In the first one, we got to play with Particle’s Photon development kit to program sensors that we wanted to implement in the conference space to enable socializing during breaks. 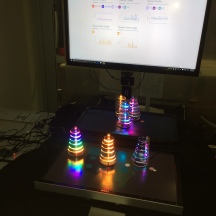 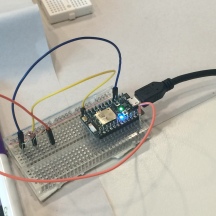 I also gave a talk, which was one of the most attended talks at the conference (yay!). I presented early results of the research I’ve been conducting with Sarah Vieweg  on social media and the Arab Gulf in our paper “Privacy and Social Media in the Context of the Arab Gulf.” The work is also explained in my previous blog post.

Thank you for all the new friends and the entire DIS team. In addition, I’d like to thank QCRI for funding my travels to attend the conference and my collaborate Sarah Vieweg for her continued Support.

I'm an applied social scientist with a passion for researching and developing the next generation of social and collaborative technologies. Currently, I'm a Research Program Manager at the Microsoft Learning Innovation Lab where our cross-functional team of PMs, UX Researchers, and Software Engineers employ design thinking to discover the future of seamless learning experiences, leveraging the power of Artificial Intelligence. View all posts by Norah Abokhodair