I Socialize and Develop

This is super exciting! Our paper Holy Tweets: Exploring the Sharing of Quran on Twitter is now published in the proceedings of the ACM Human Computer Interaction Journal (link to free arxiv version). The paper is ready to be presented in Oct ’20 during The 23rd ACM Conference on Computer-Supported Cooperative Work and Social Computing.

The paper addresses an important topic, i.e., how Quran is being shared on Twitter and for what purpose — no, not for recruiting jihadist as approached by many Western researchers. We also share valuable discoveries regarding the top shared verses in our dataset, what Quran categories are often shared on social media, and when. We also discovered and shared the concept of “digital memorial accounts” and “digital remembrance agents” — bots that tweet on behalf of someone, alive or dead, to ensure the stream of good deeds continues for them, whether in their current life or when the die.

Abstract: While social media offer users a platform for self-expression, identity exploration, and community management, among other functions, they also offer space for religious practice and expression. In this paper, we explore social media spaces as they subtend new forms of religious experiences and rituals. We present a mixed method study to understand the practice of sharing Quran verses on Arabic Twitter in their cultural context by combining a quantitative analysis of the most shared Quran verses, the topics covered by these verses, and the modalities of sharing, with a qualitative study of users’ goals. This analysis of a set of 2.6 million
tweets containing Quran verses demonstrates that online religious expression in the form of sharing Quran verses both extends offline religious life and supports new forms of religious expression including goals such as doing good deeds, giving charity, holding memorials, and showing solidarity. By analysing the responses
on a survey, we found that our Arab Muslim respondents conceptualize social media platforms as everlasting, at least beyond their lifetimes, where they consider them to be effective for certain religious practices, such as reciting Quran, supplication (dua), and ceaseless charity. Our quantitative analysis of the most shared verses of the Quran underlines this commitment to religious expression as an act of worship, highlighting topics such as the hereafter, God’s mercy, and sharia law. We note that verses on topics such as jihad are shared much less often, contradicting some media representation of Muslim social media use and practice.

I’m excited to hear your thoughts and comments on this work. 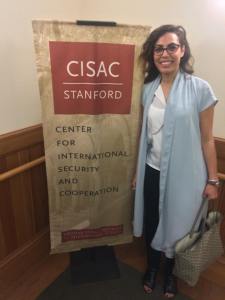 This past Friday (March 6, 2015) I participate in a workshop titled Blogs and Bullets and hosted by the PeaceTech Lab, George Washington University, and the Program on Liberation Technology at Stanford University.

I was honored to be participate and be part of the discussion on the use of Social Media analysis in research around Political and Natural crises. In my opinion, this is an important discussion to continue guiding the social computing and political research discourse to more rigors results and to benefit the users.